After a busy week and weekend on the water, I'm pleased to report that the inshore fishing in the Ocean Isle and Sunset Beach area has continued to improve.  After some cool weather Easter weekend which dropped the water temperatures by 10 degrees, we have recovered and the water temps are averaging in the upper 60s once again.  While our success continued to be a little up and down from trip to trip, we managed to find some action each day.  We have had some great action with some nice black drum (up to 8-9 lbs) as well as a few mid to upper slot redfish mixed in. The big news however is that our flounder bite has officially kicked off in Ocean Isle area for the 2014 season.  There are of course quite a few undersize flounder around, as is normally the case in the early spring, but there have been some nice ones caught as well.  After such an up and down spring, i'm just excited that they are finally biting, and its certainly worth weeding through some throwbacks as long as we have some steady action.  Things will only continue to improve in the coming weeks, so now is the time to plan to get in on the action.

On a side note, dates for the summer are beginning to fill up fast, so don't hesitate to give me call if you would like to do some inshore fishing while on your vacation this summer. 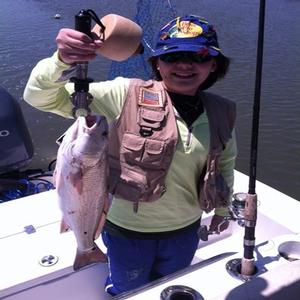