Another July has flown by, which means that our summer season will soon begin to wind down for another year.  There is certainly no doubt that the older you get, the faster time passes.  All in all, we were fortunate to have some fairly consistent fishing throughout the month.  We have continued to have steady action with the flounder and trout, although the trout bite has slowed somewhat in the last week or so due to the heat.  We have caught some nice flounder throughout the month, with several nice ones in the 4-5 pound range.  There have been a few real doormats up to 10lbs caught in the area as well.  We also managed to find a few reds during the course of the month, but still certainly not as many as we would have liked to.  There have also continued to be quite a few black drum around, and although many of them have been on the smaller side, they have produced some fast action on some trips.  However, the extreme heat is starting to catch up to us, and has made the fishing tougher over the past week or so.  This is nothing new, as we always have to contend with hot water from late July to early September.  I would expect the flounder fishing to remain decent though, as it normally does, and hopefully a few more reds with filter in and continue to give us some action.  So, although it is generally a tougher time of year for inshore fishing in the Ocean Isle area, all it certainly not lost, and we still have the opportunity to have a great day of fishing at any time.  I still have plenty of openings from the 2nd week of August onward, so give me a call if you're going to be in town and would like to do some fishing.

Also, the fact that it is August means that we are one step closer to the fall, and many of the prime dates in October and November are already filling up.  So please give me a call if you would like to plan a fall trip and get in on some of the great action we typically have that time of year.

Check out the photos of some of our catches from the past few weeks below! 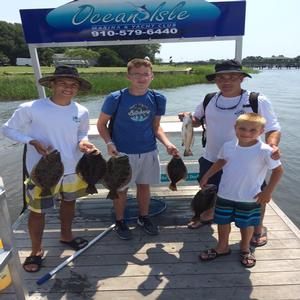