After another busy week on the inshore waters, I'm pleased to report that we're still finding some steady action, despite the hot weather and hot water.  The month of August can be unpredictable, with some years having good fishing and other years having some really tough fishing.  But, even though we're only three days in, things are certainly looking up for this year.  I have stuck to pretty much the same pattern of fishing live shrimp under floats, as it has continued to produce some nice redfish and speckled trout for us this week.  We even caught a couple of 4 pound class trout this week, which is unusual for August.  We also have continued to catch quite a few nice black drum and sheepshead while fishing for the trout and reds.  There has also been some decent flounder action this week as well, with some of the usual late summer spots beginning to produce some nice fish.  Hopefully the good weather will continue, as the flounder fishing should benefit if it does.  So even though its hot, the fish are still cooperating, so don't miss out on the action.  I've got plenty of openings left for this coming week, so give me a call! 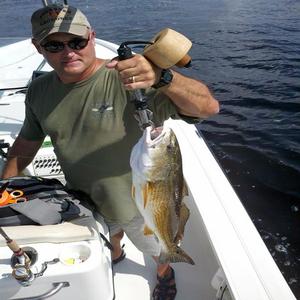