Sorry for the lack of reports recently, as I have been on the water nearly every day the past couple of weeks.  Fortunately, I am pleased to be able to report that we have had some good fishing in the past couple of weeks for all of the target inshore species.  The flounder fishing has remained good, as we have been able to find plenty of keepers recently, with some real nice ones up to 5lbs.  There have been some real doormats caught in the Ocean Isle area recently, including at least a couple of 10+ pound specimens.  We got back after the trout this week now that the season has re-opened and we can once again keep them.   Starting Monday morning and lasting all week, we found some great trout action.  Many of the schools of trout have been mixed in size, but we have caught plenty of nice ones, including some "near-gators" up to 4.5lbs.  The redfish have made a few strong showings recently as well, although I admit we have fished for them less in the past couple weeks than we have for the trout and flounder, simply because the trout and flounder have been biting so consistently.  We have also manged a few nice black drum and sheepshead as "bonus" fish while chasing our three target species.  Check out the photos of some of our recent catches below.  I only have a few of openings left over the next three weeks, so don't hesitate to give me a call if you want to get in on the action! 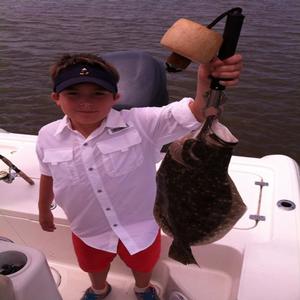