Its hard to believe that we are entering the last few days of October.  Another month has flown by, and November is right around the corner.  While our weather has continued to be a little up and down, fall-like temperatures have finally set in, and our water has cooled considerably over the past week or so.

There continue to be a few bull reds around, and they will probably be around at least a few more days, but as the water continues to cool, they will eventually begin to make there way toward deeper water.  Once again this year, we did not have much of a beach bite, with only a few scattered fish here and there on the bait pods.  The bull red action in/around Little River Inlet has remained very consistent overall however.  We have begun to transition from focusing on the big reds to spending more time targeting speckled trout, black drum, and "creek" redfish, all of which are beginning bite well as the water cools.  Not to be forgotten, we have also continued to find a few hungry flounder mixed in with the other species.

We should be at the very beginning of the best speckled trout fishing of the year, as November is usually the best month of the year to catch them.  There will also be plenty of action to be had from the black drum and redfish in addition to the trout.  I still have plenty of openings throughout the month, including several weekend days, so give me a call and don't miss out on the action.  Check out a few of our recent catches below! 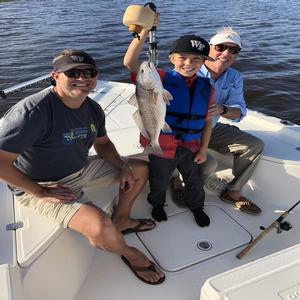