Well folks, we are already halfway through the month of October, and what a different October it has been.  We have continued to have unseaonably warm air and water temperatures, which has really thrown us a curveball.  It has been fairly slim pickings on the bull reds so far, although we have some weather coming this week that will hopefully improve things.  We have caught a few of the big bulls, and there have been some big schools of them seen offshore, but they just haven't moved in on the beaches in the numbers that we've become accustomed to.  That being said, we have had some steady action with the smaller reds both in the creeks and around the inlets.  The creek fish have been varying in size from 16 inch pups up to nice upper slot size fish.  We have also been picking at the flounder pretty steadily as well, with a few nice ones mixed in.  The trout fishing is also slowly improving as the water cools, and while we have been catching a few, they should begin to bunch up nicely in the coming weeks.  Finally, we have had quite a few false albacore along the beaches this year, and they have provided some drag screaming action on a few days when things were slow elsewhere.

Looking forward, its hard to say what the bull reds may or may not do.  They may show up late and hang around into November, or things may simply time themselves out and we may not get the big push that we're looking for.  However, the next thing on the radar is going to be November speckled trout fishing.  As I mentioned earlier, they should begin to bunch up in the next couple weeks, and November is almost always the best month of the year to come trout fishing.  I still have plenty of dates open in November, but don't wait too late to call so that you hopefully can get the date that you're looking for!  Check out some of our recent catches below! 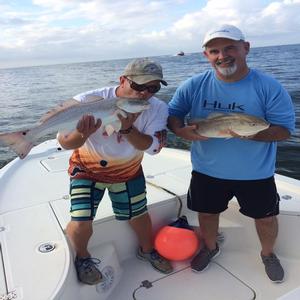