Once again I have fallen way behind on my reporting, but between fishing and several other projects, I have been spread pretty thin lately.  If you have been keeping up with my Facebook reports over the past few weeks, you've seen that we have had some outstanding speckled trout fishing in the Ocean Isle and Sunset beach area.  While the majority of the fish have been on the smaller side, they have made up for it in shear numbers, the likes of which we don't get to see very often.  We had several 100+ trout days in November, which made the days when we caught 40 or 50 seem slow.  Once again, the majority of the trout have been in the 12 - 13" range, but on most days we were able to pick off a good catch of keepers for the frying pan.  We have been finding a few nice trout up to 4lbs or so mixed in as well.

With the trout biting as hard as they have, we haven't spent a ton of time chasing other species, but we have been picking away at a few nice reds and black drum as well.  Most of these have come as bycatch while trout fishing, but they too are begining to bunch up as winter approaches, and someone taking the time to target them has the potential to produce a good catch.  While we don't think about flounder very much this time of year, we have still been catching one here and there while trout fishing.

While we still have some good fishing to be had the moment, we are going to transition into winter mode pretty soon, which will ultimately make things a little more difficult.  The bottom line is that while the fish are schooled up tighter in the winter, they simply don't have to feed as much, and often we need just the right conditions to get them going.  I'm in the process of giving a Ranger Banshee flats boat a refit and a facelift this winter, which will ultimately allow for more access to wintertime fish in 2019 and beyond.  Between this project, finishing a remodel of my house, and try to get a little hunting in, I have a busy winter ahead.  But if your in town over the next couple weeks and want to give the inshore fishing a shot, give me a call.  Check out some of our recent catches below! 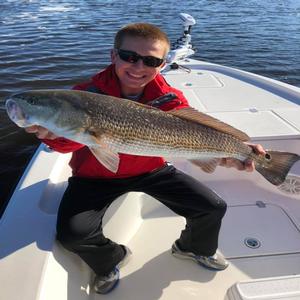