Ready for some fall inshore action!

September once again proved to be a transition month for the inshore fishing in the Ocean Isle/Sunset beach area.  We continued to have consistent mixed-bag action, much like we did in August, but we just didn't see the numbers of fish that I would have liked to.  However, its officially fall now, and September is about to be a thing of the past.  The fall fishing is beginning to take off nicely, as the bull redfish run is kicking into high gear and the fish in the backwaters are also becoming more and more active.  So instead of dwelling on what has been some tough fishing overall for the past few weeks, I'm looking forward to what will hopefully be some hot action in the near future!  Hopefully the big drum will stay with us for a while, and when they finally leave, I do believe we will see some strong trout fishing later in the fall, hopefully along with some flounder and puppy drum action as well!  Weekend dates for the rest of the year are beginning to get scarce, so call now if you are coming to the beach for a weekend this fall and want to do some fishing.  I also have plenty of weekdays still open from late October-mid November.  I'm running a little short on pictures for this entry, but hopefully that won't be an issue next time around! 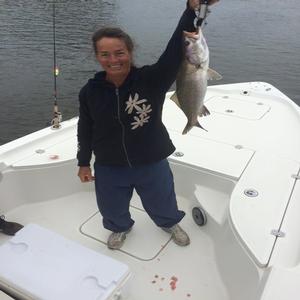