I was able to pick up right where I left off at the end of last week, finding a steady speckled trout bite each day so far this week.  The action has been same as I spoke about in my last report, as we have continued to find trout of all sizes mixed into the same schools.  One cast might yield a 12 incher, while the next might produce a 4 pounder.  But regardless of size, the bite has been good and they have provided plenty of action so far this week.  There continue to be a good number of redfish in the same areas as well, and we have caught a few each day in the same areas where we have been catching most of out trout.  I haven't spent much time on flounder grounds this week, but did fish for them a little while on Monday, managing to find a couple of nice keepers.  The fisherman that have been concentrating on the flounder having continued to catch them well, and I'm sure I'll spend a little more time fishing for them later in the week.  So there you have it, mostly a mirror image of my last report, which is a good thing, because it means that the fish are still biting well!  I am continuing to be booked up several days in advance, so don't wait to late to call or you might miss out! 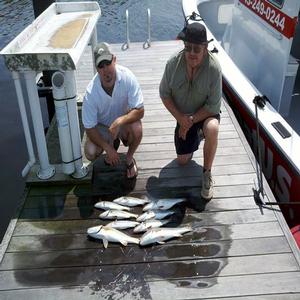