As is usually the case, the week prior to (and usually the week after as well) Easter has brought quite a bit of life to both Ocean Isle and Sunset beaches.  Thankfully we have continued to have failry consistent inshore fishing for those who have chosen to venture out on the water while they were in town.

Our tides have been a bit tricky the past few days due to a full moon, which has made for higher highs and lower lows, and a ton of current in between.  However we have managed to produce some fish each day.  The speckled trout bite continues to be consistent throughout the area.  The fish still continue to be mixed in size, and while there are still a lot of small ones in many areas, there have been a good many nice 2-3lbers and even a few gator size fish still showing up.  The black drum and redfish have also been biting fairly consistently, with both showing up together in some areas, while other areas have produced more reds or more blacks respectively.  Finally, we are beginning to see the flounder start to bite a little more as well, with even a few keepers beginning to show up, especially in the areas that traditionally produce flounder early in the season.

I still have a few openings for the week after Easter, and plenty from early May onward.  I have been filling up quite a few days for the summer recently however, so don't wait until its too late as you plan your summer vacation.  So if your're going to be in Ocean isle or Sunset beach in the near future or over the summer, give me a call and lets get out on the water. 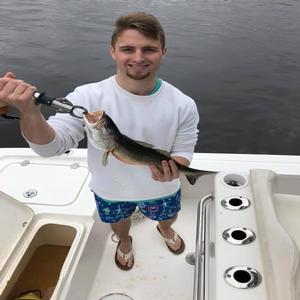