Well folks, another year has flown by and we have only a few days left in 2016.  I would like to thank everyone who fished with me this year, and say that I certainly appreciate your business and hope to see you next year.  Our late fall speckled trout fishing was great this year from late October to early December, and thankfully we had a nice class of fish around throughout the duration of that time.  I think we managed to catch a limit of trout on the majority of our trips, and usually had a few black drum or reds thrown in for good measure as well.  It wasn't until late in the season that the small trout started to move in on many spots, requiring us to grind through a lot of undersize fish for every keeper.  All in all, 2016 was a decent year fish wise, and hopefully 2017 will be even better.  I sure hope to see you sometime next year.  For the time being, its time to do some maintenance and hopefully do a little hunting.  Thanks again to everyone for a great year! 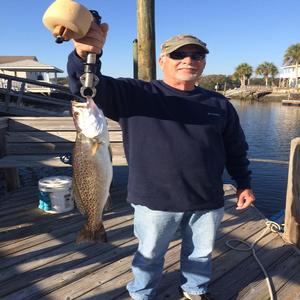