Almost the end of summer report!

As I type this, we are two-thirds of the way through the month of August, which typically means things are about to slow down a good bit around Ocean Isle and Sunset beaches.  While the end of our busiest season of the year is a little bittersweet, it only means that we are that much closer to the best fishing of the year.  Over the last few weeks, we have had what I will once again describe as "typical dog-days of summer fishing", meaning we have had some great days, as well as some slow days, and many days in between.  Thankfully, we have continued to catch a nice mixed bag of all of our target species during this period.  We have had some decent redfish action, with most of the fish being nice slot size fish from 18-22 inches.  The trout have also stuck around throughout most of the summer, and have given us some good catches well past the time when I would normally expect the trout fising to slow down.  Finally, the flounder fishing has been a little off from what I would typically expect for this time of year, but we have managed to consistently pick away at them, finding quite a few nice ones including a couple of 5-6lb. doormats.

I would expect this type of fishing to continue for the near future, but we are literally only a month or so away from our peak fishing season taking off.  This as always should begin with our bull redfish run, which usually lasts from around the last week of September to the third week of October, depending upon the weather of course.  But the peak of the run almost always occurs during the first two weeks of October, so now is the time to start planning if you would like to get in on some of the bull red action, as dates are already beginning to fill up.  After the reds move back offshore in late October, then our trout fishing should take off, with the month of November being our best trout month of the year, so keep that in mind as well.

We have a lot to look forward to during the next three months, so don't miss out on some great fall inshore fishing action.  In the meantime, check out all of our recent photos below! 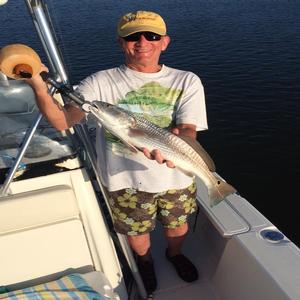