A friend of mine reminded me a few days ago what the best thing about August fishing usually is, and that is that once its August, it means fall is right around the corner.  August can certainly be an up and down month when it comes to consistently finding inshore fish in our area, and some years are pretty good and some years are really tough. I would rate this August as being pretty much in between, as we have managed to find some action on every trip, although more often that not we have had to work hard and cover a lot of water to do so. One good thing is that we have continued to have what has pretty much been mixed bag fishing, as we are still catching some of all of the target species. The trout fishing often dries up during the heat of August, but we have probably caught more this month than I ever have in August before, which is hopefully a sign that we will have a strong trout season this fall. We have also continued to find action from the flounder, redfish, and black drum as well.

Looking forward to the next 2-3 months, as many of you know, we should see our best fishing of the year, usually starting mid/late September with the bull redfish and lasting through late November with what will hopefully be some good trout fishing.  I still have plenty of openings for the rest of the year, BUT, many of the key weekend dates in October and November are already filling up, so don't hesitate to call and discuss a fall fishing trip, as now is the time to plan it, especially if you are looking for a trip on a weekend day. 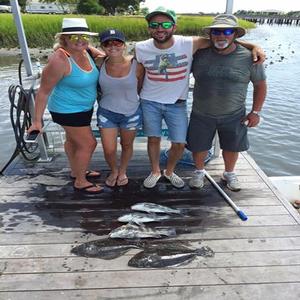