Big finish to the week...

I'm sure my reports are beginning to sound a little redundant, but we have continued to be able to find good, steady action with the speckled trout the past couple of days, just as we have all week.  The fish have also continued to be mixed in size, but we have found plenty of nice ones (2-3 pounders) that have surely made for some nice dinners for my clients this week.  There have been some truly big trout mixed in over the past couple of days as well.  We caught a nice 4 pounder on Thursday that is a great fish any time of the year, and especially during the summer.  I was surprised to see the 4 pounder, so you can imagine my surprise when after a spirited fight with what I was sure was a nice redfish yesterday, up popped a true gator trout, which tipped the scales on my Boga Grip at nearly 7 pounds, the biggest of the year so far!  We got a couple of photos of her then promptly released her so she could go drop her eggs.  We have continued to pick at the redfish while we have been trout fishing, and we got into a good bite of some nice black drum yesterday behind Ocean Isle and Sunset beaches.  I've only made a couple of flounder stops in the past couple of days because the trout fishing has been so good, but we have caught a handful, and even managed to catch an inshore slam Thursday morning!  Finally, the busiest beach week of the year is upon us, and I only have a couple of spots left for the upcoming week, so don't hesitate to call if you want to spend some time on the backwater this week! 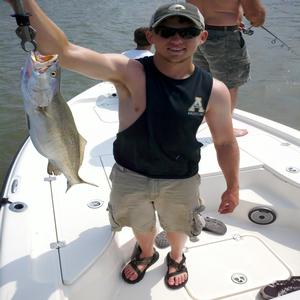