Had another great day on the water around Ocean Isle and Sunset Beaches today with a vacationing couple from Montana.  Both wanted to catch their first Redfish, and thankfully both of them succeeded.  We managed to catch a handful of Reds today which included some nice 6-8 pounders mixed in with some smaller reds, or "puppy drum" as we often call them.  We also got onto some nice sheepshead early in the trip and caught several nice 3-5 pounders, which were a pleasant surprise.  Later in the day we landed on a school of nice black drum, and managed to catch 7 or 8 of them as well.  So we caught lots of black and white striped fish in addition to the reds today. In case you were wondering what I mean, both sheepshead and black drum have vertical black and white stripes, and often get mistaken for each other.  The good weather and good fishing continues, so come get in the action! 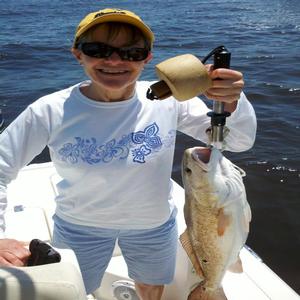