As I type this, I can thankfully say that today was the first day in nearly three weeks that we didn't get rain around Ocean Isle and Sunset beaches at some point during the day.  It was a hot and muggy day, but the sunny skies and light winds were a welcomed sight.  Last week however, the rainy trend from the previous two weeks continued, and we dodged or weathered rain storms every day of the week.  Hopefully though, will begin to dry out and our water will be able to settle out and clean up a bit.  Unfortunately however, we will likely see our water temperatures begin to steadily climb, which will again add a different degree of difficulty to the fishing, but is nothing new for this time of year.

Despite all of the challenges we have had with the weather, I am pleased to report that we have still been able to find plenty of inshore action.  Once again, I can't say that we haven't had a few slow days, but for the most part we have been able to find some nice fish on most trips.  The mixed bag trend also continued last week, with us catching a few of each of our target species throughout the week.  The speckled trout fishing has slowed somewhat, which is to be expected in August, but we still managed to find a few during the week, including a handful of nice ones to boot.  The redfish and black drum continue to provide fairly consistent action in a number of different areas,  and although we haven't really been finding any big schools in any one area, the drum we have been catching have mostly been nice fish. The bulk of the reds have been slot size, with a few stout overslot specimens mixed in as well.  The flounder have also continued to provide some action both in the backwater creeks and on the nearshore wrecks and artificial reefs.  As is normal, the flounder have been mixed in size, from undersize to some real nice ones up to 4 pounds or so.

Hopefully we will continue to have this consistent action as August progresses.  This is always the time of year when things can get a little hit or miss due to the heat, but hopefully the fishing will be a little more hit and a little less miss this year.  Our summer vacation season is starting to wind down, and I have plenty of openings left in August, especially from next week on.  Its also not too early to begin to think about the fall season as well, as dates in October and November are already beginning to fill up.  So give me a call and lets get a date booked for you.  Check out a few of last week's catches below! 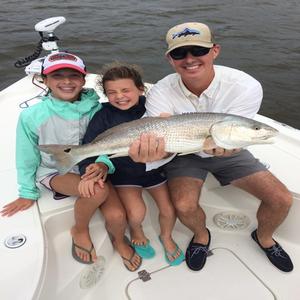