With another July nearly gone, we find ourselves in the midst of the dog days of summer, which has made for some long, hot days on the water recently.  Thankfully, we have had an occasional north wind to cool us off, but some days have truly produced some brutal heat.  Despite the hot conditions, we have still manged to find some fish to pull on.  The flounder bite has remained good throughout the Ocean Isle area, and as long as we have had clean water, we have been able to find some flounder bites.  As is normal with flounder fishing, we continue to catch some undersize fish, but there have been plenty of nice keepers mixed in as well.  We have also continued to see some decent redfish action, often times in the same areas that we have been flounder fishing, which always keeps things interesting.  The speckled trout fishing had gotten pretty spotty with the water being as hot as it is, but we have still managed to find a few that were cooperative.  With the summer season starting to wind down, its time to start thinking about all of the great fishing that the fall will produce. I personally can't wait for the the cool temperatures and the hot fishing.  In the meantime, I still have plenty of dates open throughout the month of August if you're going to be in the area and want to chase some inshore fish.  Check out some of our photos form this past week below! 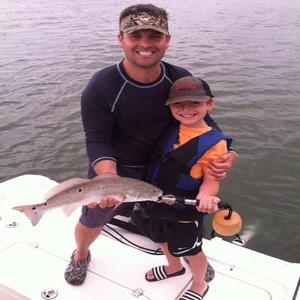