Fall is getting closer!

After another front over the weekend, I have been greeted by cool, pleasant temperatures the past couple of mornings, which remind me that fall is thankfully right around the corner.  The water temps have cooled several degrees and there are a ton of finger mullet and shrimp around, which should produce some great fishing in the near future.  We have continued to find a solid redfish and speckled trout bite the past few days,  mostly fishing the flooded grass banks of the inshore creeks with live shrimp.  The bigger reds are starting to make a showing around the Little River inlet jetty, with most of the fish averaging in the 8 - 12 pound range, but a few true bull reds of 20+ pounds have been caught recently as well.  I expect the silver mullet run to get underway on the beaches any time now, which should kick the big redfish fishing into high gear.  The flounder fishing has continued to be good as well, with the surplus of finger mullet and clean water still around.   Most of the normal backwater flounder spots have been producing fish, and the nearshore wrecks/reefs continue to yield some nice flounder as well.  We've survived August and still had good fishing throughout the month, so hopefully things will continue to cool down and the fall fishing will start to kick off in the next few weeks.  I'm already starting to book some trips for the prime months of October and November, so if you're planning on making a fall fishing trip give me a call so that you get the dates that you would like. 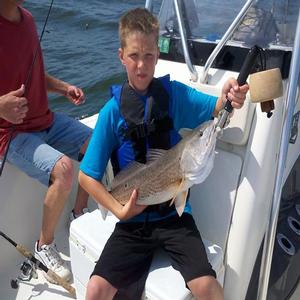