After several weeks of near miserable heat, we have finally experienced a much needed cool down the past few days around Ocean Isle and Sunset Beaches.  It has been feeling a lot more like late September than late July, and we have been enjoying every minute of it.  The cooler air tempartures also cooled the water just a bit as well, which was also much needed, and has allowed us to keep finding some consistent action despite it being the middle of summer.

The finger mullet have finally shown up in good numbers, and their presence really has the inshore predators keying in on them. The flounder fishing has picked up a bit both inshore and on the nearshore wrecks/artificial reefs, which I feel is at least partially the result of the mullet finally getting their act together.  As is normal, we have had to weed through a good many undersize flounder for every keeper, but we have been finding a few nice ones.

We have also been finding some nice redfish taking advantage of the new push of mullet as well.  We have been catching some really nice ones to boot, with a good many mid to upper slot size fish, and even a few over slot bruisers.

We're also still finding some action with the speckled trout, although they have been biting a little more inconsistently as of late, simply due to the time of year and the hot water.  Depsite this fact, we're still seeing some really nice ones up to 4+lbs, which already has me excited about what our fall trout fishing might bring.

Even though we've still had a slow trip or two here and there, I am very pleased with the quality of the fishing we have had throughout July, as I have certainly seen it much tougher.  I can only hope that it continues on into August and beyond.

I still have a few openings during the first half of August and plenty during the second half, so be sure to give me a call if you're planning a late summer vacation to Ocean Isle or Sunset Beach and want to get in on some inshore fishing action.  Check out some of our latest catches below! 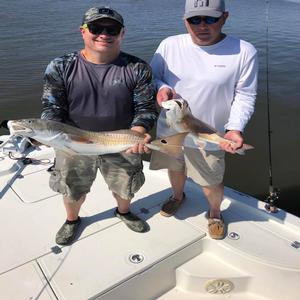