We left Ocean Isle Beach this morning and spent some time out in the Gulf Stream on Monday. For the past two days I have been in the Sunset Beach area.  Yesterday, I had Dave and Luke from Charlotte onboard for a full day adventure.  It was a pleasant day on the water overall, with the only downside being a stiff southeast breeze of about 15 knots or so.  A southeast wind, to me a least, is one of the toughest to fish on in this area, and it certainly made us work for the bites we got yesterday.  We made a bunch of stops throughout the day, but in the end, we wound up with a good catch of fish consisting of a half dozen or so speckled trout, and a couple flounder, redfish, and black drum, giving an inshore slam plus some for the day.  Today, the wind fell out to next to nothing and came around to straight out of the south, which I was certainly glad to see. I had Dave (a different Dave from yesterday) and his wife Erin, who are from Virginia, onboard today.  We started out fishing some docks in hope of getting a few redfish bites, but they didn't want to play so we quickly switched gears over to trout fishing.  It took a couple of stops, but we finally landed a school of hungry trout which kept us busy most of the morning.  We ended up keeping a limit of male trout while releasing around 6 or 7 more nice females (up to around 3.5 pounds or so) so that they could get their spawning done.  We also had a stud pompano of about 3 pounds and some bluefish thrown in as well.  It looks like we have plenty of good weather in the near future, so the fishing should remain good.  Come get in on the action! 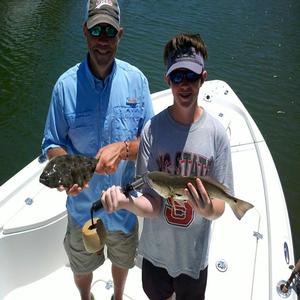