Once again I have fallen behind on my reporting, as fishing and life in general have been keeping me spread very thin recently.  I am pleased to report however, that even though we have had our share of challenges as far as conditions go, the fishing has been pretty good overall.  We seemed to have a lot of fresh, and likely low oxygen water around in many of the back creeks early in the month, but most of that seems to be clearing up now.  The 40+ knot onshore winds that Tropical Storm Michael brought us last week also really stirred up our water, and again presented us with a new set of challenges.  Fortunately though, that too is settling out, and coupled with the cooler air temperatures that we are finally beginning to see, our fall fishing should only be getting better and better as the month goes on and October turns into November.

The bull reds have been around consistently throughout the first half of the month, and should continue to be for a little while longer.  Unfortunately, they have been biting a little more sporadically as the month progresses, as they are receiving a ton of fishing pressure due to them being concentrated in one area for the most part due to warm water temperatures and lack of menhaden along our beaches.  Despite all of the other boats fishing for them, we have had some success with the bulls, and hope to have a little more before they depart for the year.  In the backwaters, we are continuing to see more and more life as the lingering effects of the storms slowly go away.  We have been catching some nice reds in and along the grass on the flood tides, which is one of my favorite ways to catch them.  These fish have ranged from 16 inch pups up to 30 inches.  The trout have also made quite a good showing already, as we had good catches of them on several trips just prior to Michael's arrival in our area.  Hopefully they will be right back biting again once our water settles out just a little more.  In addition, we have also continued to connect on a few nice flounder as well.  I must admit that I haven't spent much time targeting them specifically, as most of the ones we have caught have been bycatch when were fishing for reds or trout, but the bottom line is that there are some around to be caught.

As the fall progresses, the fishing will continue to change a little as it always does, but in effect should just get better as the trout, redfish, and black drum start to bunch up in preparation for the winter months.  That being said, there is still plenty of time to get in on some hot fall fishing action.  I still have plenty of openings left between now and Thanksgiving, so be sure to give me a call and don't miss out.  Check out the photos below to see what we have been up to the past couple of weeks! 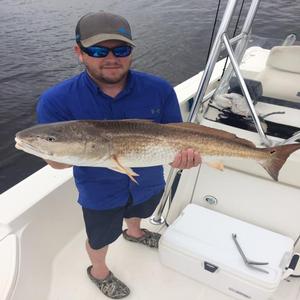