The month of October has always been and will always be "the" month for inshore/nearshore fishing in our area, and it lived up to its reputation once again this year.  But, just because October is nearly over doesn't mean the inshore fishing action is nearly over as well, because some of the best fishing of the year is just getting started.  Our bull redfish run this year was one of the longest I can remember, thanks mostly do to the warmer than normal water temperatures that we have experienced.  There are still a few big reds being caught, but the bite is starting to wind down as we are finally getting some cooler weather.  However, the smaller reds are moving into the areas we would normally find them in the backwater creeks during the late fall and winter.  They are starting to form bigger and bigger schools, which will certainly provide some good action in the coming weeks.  Also, the trout are beginning to show up on their normal fall spots as well.  They too seem to be getting more schooled up every day, meaning that the peak of trout season shouldn't be very far away. Finally, the flounder fishing has been exceptional this past week, as there have been some big catches of flounder in the past few days, both in number and in size.  While the big reds may be leaving till next year, the next few weeks usually provide the fastest action and some of the best catches of the year for all the target inshore species, so don't miss out!  As far as availability for November, my weekend dates are nearly full, but I have plenty of weekdays available if you want to get in on the action! 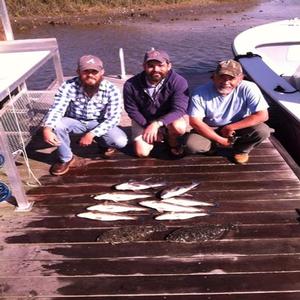