Well folks, tomorrow is officially the first day of fall, and I was hoping to be able to write you a report about how the fall fishing was beginning to take off and how everyone needed to plan a fall fishing trip asap.  Unfortunately however, we're currently a week and a half into the saga of hurricane Florence.  I'm currently still surrounded by flood water at the moment and haven't even made it back to Ocean Isle.  The water is finaly starting to recede and hopefully we will be back fishing by early next week.  The southern Brunswick county beaches fared pretty well during the storm and have minimal damage.  The northern end of the county, the Southport/Oak Island area, and inland areas of the county took more of a hit this time it seems.  We of course had some wind damage but it was certainly not the worst we've seen.  However, the flooding has been unprecedented and has hit very close to home, having left many friends and neighbors displaced even now, long after the storm has passed.

I'd also like to say thank you to all of my awesome clients who called, texted, and e-mailed to check on me prior to, during, and after the storm.  I really appreciate it.

The fishing is of course going to be affected somewhat by the storm, but should bounce back a lot quicker than most folks would think.  The fishing was starting to get good in the days before the storm, and the few guys that have made it back out on the water have had some success.  Honestly, now all we need is some cooler weather, which it looks like may be coming toward the end of next week.  The October bull redfish run is hopefully right around the corner, and in the meantime there should be plenty of reds in the backwaters to play with, as well as some trout and flounder.

Sorry I don't have more to talk about on fishing front, but as you can imagine, fishing hasn't been the first thing on my mind the past few days.  But, the best part of the year is almost here, and I still have plenty of openings throughout October and November, so give me a call and we can get a trip planned for you.  I'm short on photos this time around, but below are a few I took just before the storm. 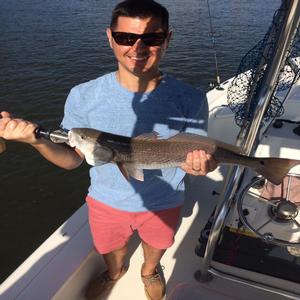