Well, another week is in the books and thankfully the fishing has continued to be good despite the usual late-summer heat.  The redfish bite was very strong early in the week, as we managed to get on several nice schools over the course of several days.  The fish were really mixed size wise, from 14" puppy drum to 27+" "over-slot" fish in the same areas, which was unusual.  But, regardless of size, a redfish is the hardest fighting fish in the backwater, so no one was complaining.  We also managed to find a handful of trout and a couple of sheepshead as well, but the reds definitely dominated the scene this week.  The has still been some good flounder fishing going on in a few areas, and some really nice spanish mackerel have shown up off the beaches and around the inlets, so there are still plenty of options if one species decides not to cooperate on a given day.  Live baiting or cast lures on light tackle to those big August spanish mackerel is something I always look forward to each year, and it looks like we should have some opportunities to do just that if the water stays clean.   I've got plenty of openings for the upcoming week, so if you're looking to get some inshore fishing in, give me a call! Check out the photos below of some of our catches from this week! 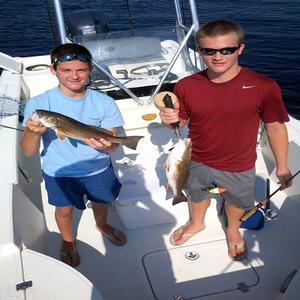