Starting the week off right!

When I launched the boat this morning in a stiff 20 knot north wind with the air temperatures hovering around 55 degrees, it certainly felt a lot more like November than the middle of May.  I was a little concerned that the cooler temperatures would give the fish lock - jaw, but fortunately one of the first casts of the morning yielded a nice black drum, and we continued to catch fish on Sunset Beach, Ocean Isle Beach and every stop after that.  While the bite wasn't red hot, it was consistent, and we never had to go to long without a bent rod.  I had a past client of mine, Mr. Ruben onboard, along with his daughter Anita and granddaughter Alexis, who both got a workout from some nice redfish during the course of the trip, including a 31", 11 pound bruiser which Anita whipped in short order.  We also managed to boat a couple of nice trout as well to add to our total for the day.  All in all, we had a successful trip despite being blown around by the wind all morning.  We're supposed to have another cool night tonight, but it looks like we're going to be warming right back up again after that, and hopefully we will be done with the north wind for a while, at least until we're ready to see it anyway. 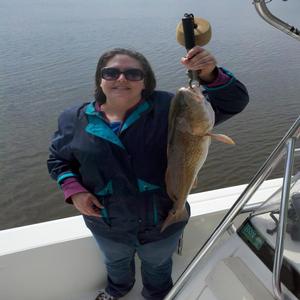