Well folks, the summer of 2016 is all but over at this point, which is bittersweet of course.  While our busiest season is over, the best fishing of the year is still yet to come.  All in all, we saw fairly decent fishing throughout the month of August, with a consistent flounder bite going on both inside in the creeks and off the beach on nearshore structure.  We also had a little more redfish action during August than we had for much of the summer, which was certainly nice.  Finally the trout even hung around on many of their normal spots throughout the month, and gave us a little of a rare August trout bite.

Looking forward however, we still have a lot of good stuff ahead of us, and things are already beginning to shape up as I write this.  The silver mullet run is in full swing on the beaches, and the pods of menhaden are begining to show back up, and along with them a few bull reds are begining to trickle into the area.  We should be only 2 - 2.5 weeks away from seeing the bull redfish bite begin to take off, so now is the time to plan if you want to make a trip to try and fish for them.  In the meantime the flounder, trout, and puppy drum fishing on the inside should also begin to improve as the water cools.

Once the bull red bite begins to taper off in mid-October, we will roll right into trout fishing season, and they will be the primary targets for the rest of the year, with the peak of the bite usually happening in November.  However, last year we had some good trout action in late October, which is actually early during that season, so hopefully that will repeat this year.

Open dates in October and November are beginning to fill up quickly, especially the prime weekend dates, so now is the time to plan your fall fishing trip! In the meantime, check out the photos below of some of our recent catches! 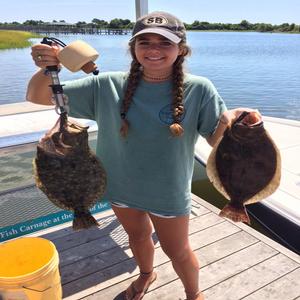