Time to get the party started!

Well folks, what little winter we had here in southeastern NC went by in a flash, and now here we are at the beginning of another fishing season.  Early spring is typically a time of year that I honestly dread, because the fish are often still bunched up in a few specific areas, usually making them hard to get on.  However, it seems that the mild winter may have done us a favor, as the fishing is already starting to take off nicely in our area and should only improve in the coming weeks.  We've been finding some decent action with some nice black drum, and have even found a few reds mixed in with them some days.  Also, it seems that many of the trout we had around late last fall have stuck with us, as we have had some good trout action on a couple of trips as well.  Granted, most of the trout are on the small side, but a few nice ones have been showing up as well, and it is certainly very encouraging to see fish around this early.  Finally, the first flounder of the year have also begun to bite, and although I personally haven't spent much time with them so far, other fishermen have been finding a few, with a few keepers to boot.  In conclusion, things are certainly looking up for the 2016 fishing season, so now is the time to start thinking about trips for later in the spring or during your summer vacation, so give me a call and lets get a date booked for you! 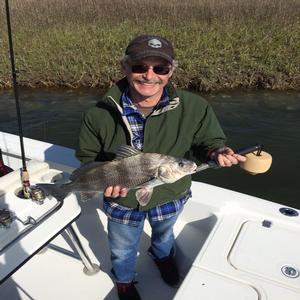